Rodeo contenders pay their own way as they travel extensively following the circuit. The prize money is won by a small number of competitors who excel on the day. It takes $40 to enter each event and the money gathered goes to the top four prize winners in a section. The hosting club also makes its own contribution to the winnings. The prize money is usually between $400 and $1,000. After the chutes open in the bucking events, it’s the cowboys’ job to last eight seconds till the hooter sounds. If the ride is rough, riders have better opportunities to earn more points. The animal can score up to 50 points for their performance and the rider operates on the same scoring system. The cowboys experience a dangerous adrenaline rush, but they live for the opportunity to show their honed talents. Soft tissue damage due to sprains and fractures is common. Far more extensive injuries can also be expected from dislodged riders. Above, Steve Houston rides a bronk at Waikouaiti, February 2008.

After the hooter sounds, the daring pick-up men ride their horses close. They lift enduring cowboys from their bucking mounts and return them to the ground.

Originally rodeos were known as “buck jumping shows”, but this changed in New Zealand during the forties.The horses used in the bucking competitions are usually ones that have been difficult prospects for general breaking and riding. Others have been bred for the sport and are contracted out.

Bucking bulls are considered the most difficult to ride and are mostly Friesian and Friesian crosses. However, most riders consider Texas Longhorn Ayrshire crosses to be best for the job. Some bulls weigh in at close to a ton. Creatures like the well-known Tyson have weighed in at 620 kg. 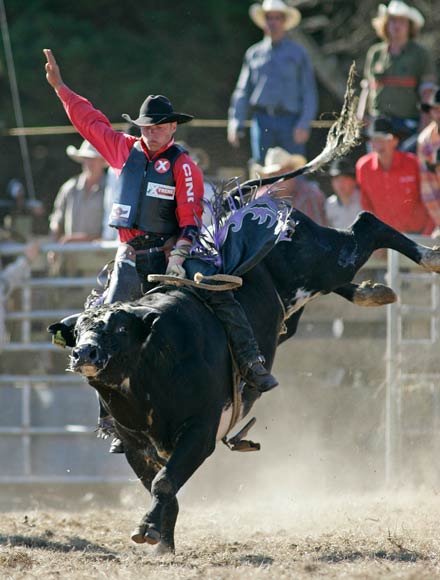 Above, the rider tries to stay on the wild bulls back.
The 50th Southland rodoe in February 2007.


The rodeo clowns give added entertainment as they run about. It’s their calculating task to distract enraged bulls.

Bulldogging” is an event when the steer runs from the chute and a cowboy rides on its right side to keep the steer running in a straight line. The wrestler rides on the left side and dives from his horse, grabbing the steer by the horns and brings the animal to a sudden stop, before putting it on its side. Above, Don Tisdall and son Roy roping a steer in the twin Rover Jack Pot Rodeo.
Winanakarua in December 2007.


In the "calf roping ", the riders and horses follow the calf as it comes running from the chute. The calf is roped and the horse stops as the rider slides from it to throw the calf to the ground and tie any of its three legs.

The cowgirls and their horses are barrel racing experts and the competition can be close. The barrels are put out to make a triangle. Then the riders are timed while riding as quickly as possible making a full turn around each barrel and being careful not to knock any over. Photo by Andrew Mackay
Above, Steve Church competing in the national finals at Millers Flat 2007.


For each event, it is the top eight competitors who earn points towards a chance to compete in the New Zealand finals.Urenui Rodeo is the last opportunity for partisipation to earn points each year.

The cowboys and girls look debonair in their flamboyant western clothing, silk scarves and Stetsons.

The Church family have been involved in New Zealand rodeo for over 40 years. Merv Church was the first to initiate his family into this rugged sport. He began competing at the age of 13. Merv has been inducted into the American Cowboy Hall of Fame. He has also received an Order of Merit at New Zealand Government House for his contribution to the sport. Over 16 years (1970–1986) Merv won 15 national all-round titles. This enabled him to be recorded in the Guinness Book of Records. Merv’s six children, brothers, nieces, nephews and other whanau have all competed in the gruelling sport. All take an intense interest in their relatives’ riding and competing. It’s a love for family and sport combined that earns respect for them from around the country. 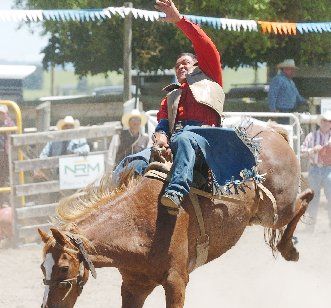 
When the rodeo folk travel their circuit, horse trucks and other mobile accommodation carry fridges, stoves and mattresses. These are cheap homes away from home and there is often fresh mutton and other accompanying kai to contribute to succulent meals. 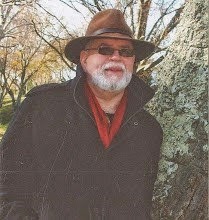